What a success story! The famous band from the Pacific Northwest has released six Top 10 albums and 20 Top 40 singles. The first women to front a hard rock band, Ann and Nancy Wilson were rock pioneers, inspiring hundreds of women to pick up a guitar or a mic and start a rock band. They are currently on tour in support of their newest release, "Beautiful Broken". Oh, and in case you haven't heard, They were inducted into the Rock N Roll Hall of Fame in 2013. 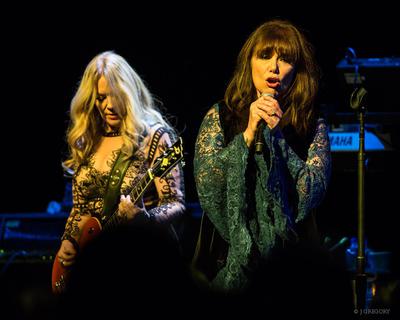 Although the supporting band members have changed over time, Ann and Nancy have stayed consistent with over four decades fantastic song writing and live performances. Tonights show to a sold out ACL LIve, presented a delightful mix of these hits - much to the delight of the happy Austin crowd which included rockers of all ages.

The band opened the show with '"Wild Child" from the 1990 album, Brigade. Then, the capacity crowd exploded as they played the rock ballad "Kick It Out" from the "Little Queen" album followed quickly by the mega hit "What About Love".

The sisters still rock! I was impressed by Ann's voice, Nancy's acoustic and electric licks, and the supporting band was tight with great energy. We also had a chance to hear a few new songs from their latest project; "I Jump", with it's retro-folk twist and "Two", a softer offering sung by Nancy.  These new songs and the new album are currently available on iTunes.

I noted several personal highlights from the show. I loved the energy from "Mistral Wind"  and of course, the souring chorus of "Crazy on You". I must say I was a little disappointed they didn't play "Magic Man"; probably their biggest hit from their 70's debut album, but there were so many great moments from this show. One of my favorite segments was actually during the encore. Fans that have followed the band over the years know that like many bands, they were heavily influenced by "Led Zeppelin". All three encore songs were Zeppelin songs - finishing up the night with a fantastic version of Stairway to Heaven. topping off a wonderful evening!