The thing about Cyndi Lauper is her immortal charm. Throughout her career, she’s been a little bit of everything: a Grammy/Emmy/Tony award-winner, a songwriter for studio and stage (Kinky Boots), a huge pop star for the mall rats, and even a blues performer. Oh, and just when you think you have her figured out, she decides to show you yet another side. 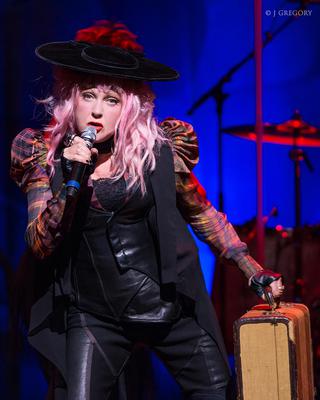 Cyndi was in town this weekend taping a show for “Austin City Limits” and then a concert the following night in support of her new release – “Detour”, her new record of country covers released earlier this year on Rhino Records.

As always, Cyndi puts on a great show which starts with her stage entrance. Dressed in similar fashion to her album cover, Cyndi entered the ACL stage with suitcase in hand, true to theme but with a down to earth script. Cyndi opened the show “Funnel of Love” followed quickly by “She Bop”, and “Heartache by the Numbers”. She did a really great job of mixing things up with a nice performance of “I Drove All Night” and the Patsy Cline classic “Walking After Midnight”.

I liked the fact that Cyndi is so personal with her audience. She took about 12 minutes to talk about her new music, and how these original hits influenced her growing up. How they were a part of her life and she went on to discuss more about the differences in her generation. Cyndi is talking to the audience as if we were all in her living room.

I think the show was fun and maybe a little different than expected. It’s safe to say for certain that Cyndi is still so very cute and a very talented performer with a great live band! Not everyone can sing these classics as they were intended, she nailed them all with surprising ease with great vocal range.

From what I could see from crowd reaction, the high points of the show actually came on the encores as she performed the biggest hits of her career; “Time After Time”, “Girls Just Want to Have Fun”, and on the second encore, a solo a cappella version of “True Colors”.

All in all, a fun night with a fun artist which isn’t afraid to show her true colors, which may indeed change over time. That’s just the way she is.